The last illustration for the Secret Sherry Society: the socialite. Keeping with the concepts of the previous two illustrations: throw in an invisible person and let their clothing and accessories describe them. Please note that no animals were hurt in the making of this painting.

From the simple sketch, I knew where I wanted to go with this illustration: in this project: I twisted things around: using the figure to create some dynamic instead of using the background. That way I solved the issue of the different elements would not be lost within the composition if the figure pose was too static! 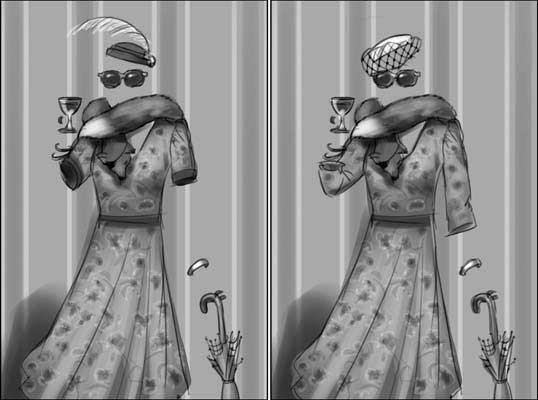 Let’s get started with the fox: this project threw my normal completion process: since there was no figure to paint first; to set the tone of the illustration: I have to rely on all the elements to do that!

It needed some patterns on that dress: I started with small regular patterns: it screamed bold and irregular. Then of course because I never make life easy for myself: so I added some lace long gloves: did I ever regret that choice: it took for ever to render.

The original sketch had the invisible socialite wearing sunglasses: would have been totally funky: but they removed them: so  we were left with the hat only.

From the sketch stage: I knew I wanted some funky striped wallpaper in the background with wonky colours in order to stand out differently than the previous two illustrations.

I have to say, that these 3 illustrations were a blast to paint and the creative team that I worked with were great fit. Thanks for the opportunity to have so much fun.