I was recently watching a tutorial on line ( about a 3d program) and I kept saying to myself: how lucky we all are to have access to a multitude of knowledge out there! Therefore let me say it again: I’m doing this blog because I wished I had that type of information when I started painting; years ago. I hope that the process that I’m demonstrating helps convey a message that any image one is working on has a story that is often more than the final result.

As much as the end result is what keeps food on your table and the phone ringing; your personal journey of creating that image is always the benefit.

The gilded cage was an assignment, it needed to reflect a “period” illustration about the life of a wealthy family and the emotional struggles and social obligations of one of the daughters of that aristocratic household.

From the initial discussions I roughly knew that I wanted to utilized elements of the surroundings or other parts of their lives to connect the figure to the world of opulence she lives in. After several rough sketches what came clear to me was the concept of using something that defines a lot of people on a daily basis: most people judge and are judged by what they wear (sad, I know): so for this assignment what would be viewed as apparel could also be used as the conceptual device that while remaining a “period” portrait, could also convey a message.

Using the lace collar as an obstacle that one can hide behind or peek through carried the message I wanted the viewer to see: that behind all that glitz was a look that connected with the viewer: a peek behind the curtain so to speak.

Sketches to me are mostly a way to corral ideas: they are usually very simple but have to work at that level of simplicity. Funny how I tend to go nuts on details while moving on to the final artwork.

Now that I have a better idea of the shapes that I’m shooting for: the real work starts: actually let me correct that: I should say that finding the concept is the “real” work: rendering is the “grunt” work.

Unlike most of my illustrations I did not have a model to pose for pictures for this project, that meant with the help of a few reference from my folders and a lot of drawing, the process of getting started was a bit slower than usual.

At one point I was trying to figure out if I was going to have the clothing toned down to let the figure shine through and I opted to pump up all the clothing and jewellery to depict the full opulence of her surroundings and way of life in contrast to the solitude and isolation she felt. 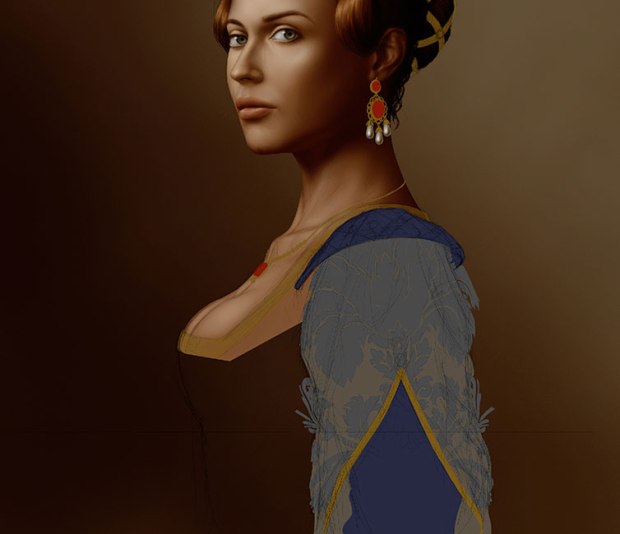 Adding patterns to the dress.

Now time for the jewels and so on. 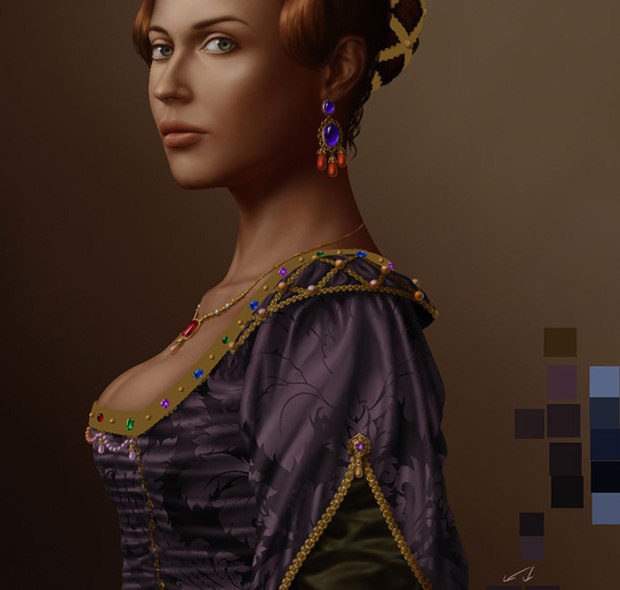 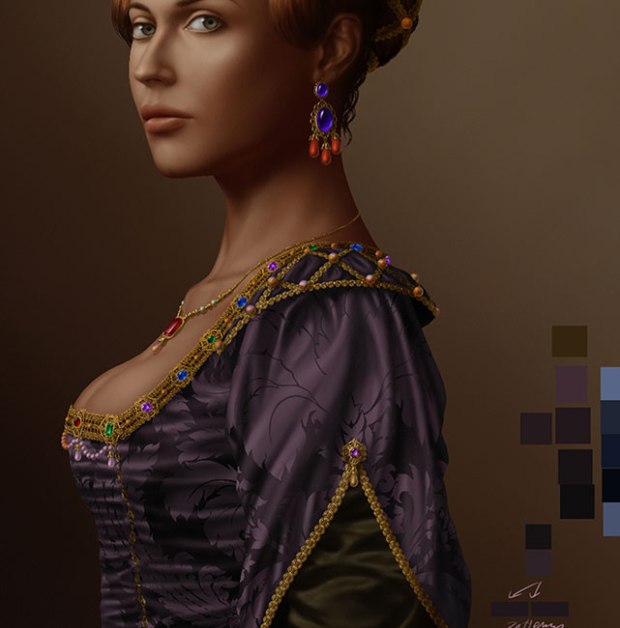 As one builds up an image, in my case anyway, it seems that amnesia strikes me and realize that all these details take a long time. That’s when “cut and paste” becomes my best friend: it makes the process faster and tweaking later becomes a viable option.

Now it’s time for the dreded lace collar: because of the title of the project: “the gilded cage” had to be golden. 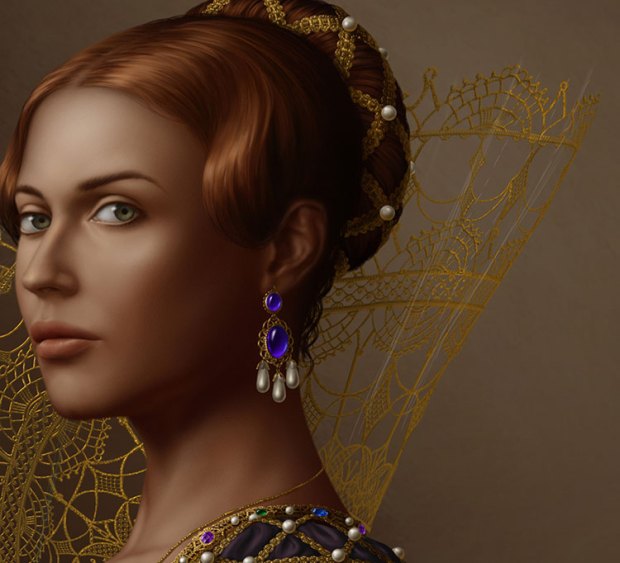 Using some textures I had and adding to it to fit the look I was going for I wish I could say that after doing the back of the figure it was just a case of “cut and paste”! No it was not: a lot more tweaking was involved.

Adding the highlights was a pain: for those of you that work with Photoshop and or Corel Painter (my main tool) there are multiple ways to create some highlights. Tried a bunch of tricks: it looked too mechanical, at the end there was a lot more work in front of me. One of my great instructor at OCAD, Paul Young had said to us about painting/drawing: “some parts will come for free and others you’ll pay the price”. That collar cost me a lot.

Here’s the final illustration un-cropped: because I mostly work for print, there is always instances of needing extra bleed for wrap-around, or additional typography, etc.

For those of you

who would like to purchase (this image or any on my site), please go to my website;

http://renemilot.com   send me an email and I’ll be glad to give you prices and options: paper, mounted canvas etc.